Latest Zenbu for Craft has new features, one is speed

The latest version of Zenbu for Craft (version 0.10.0) has seen its code reorganized to be cleaner and reduce the number of queries needed to display entry data. Development testing yielded an overall approximate 25-to-75% reduction in both execution time and number of queries. Of course, performance always depends on the number of entries and entry columns to display, but overall performance was improved.

A number of smaller, but still very nice features have also been added, such as the ability to hide the native “Entries” tab in the Control Panel, display the section name as a column in Zenbu, as well as is empty/is not empty searching (for simple fields for now).

With the summer sale still in full swing, now is a great time to get your hands on Zenbu for Craft.

Need help with Zenbu? Found something weird? Works great and want to let me know? Feel free to contact Zenbu Studio and I’ll do my best to help.

Summer is already upon us (or at least the date says so depending on where you live). Many might take some time off to relax and recharge batteries, and if you’re one of those lucky people, please enjoy your well-deserved vacation. For those who won’t or can’t, maybe you have some CraftCMS projects in the works. If that’s the case and you’re looking to boost the entry searching capabilities of your control panel, why not give Zenbu for Craft a try? Zenbu for Craft is substantially discounted for the rest of the summer (that means up to the end of August). Any questions about Zenbu for Craft? Feel free to contact Zenbu Studio and I’ll do my best to help you out.

Have a great summer, everyone!

It’s with great pleasure that Zenbu Studio announces Zenbu for Craft. For those unfamiliar with the ExpressionEngine® version, Zenbu (EE version link) is an entry manager that displays entry custom field data in the Control Panel, and also allows for powerful searching (and search saving) through these fields.

It’s been a pleasure developing this in Craft. This is a initial release, and therefore not a final release. Although it’s been working very well for beta testers, you can expect improvements in Zenbu with time.

More details about Zenbu for Craft can be found here.

Also, please use coupon ZENBU4CRAFT to get 30% off your next Zenbu license (limit 1 per user, valid until Friday next week).

Zenbustudio.com was recently updated with a few tweaks in the layout, as well as in the frameworks used. Of note during the process was how some may complain of a few simple, and sometimes unexpected, changes in software (expected is always better of course), but compared to these frameworks that change their whole nomenclature and way of working at every major version number, which happens every 6-12 months and is not always quick to implement, I say we’re not faring so bad. ^_-

Zenbustudio.com now also uses https on all URLs under the domain, in addition to the previously secure cart and purchase sections. This is to increase security even further while you browse the site, not worry whether the page is http or https, and for SEO reasons, given that some search engines now value https sites higher than http.

As always, if you encounter any issues, feel free to contact me.

One year ago, an idea was brought to the world to find a way to edit entry data without having to load that slow entry form. Today, Henshu reaches its initial goals and is mature enough to be version 1.0.

I hope you enjoy this latest version and that it saves you times when managing your entry data. Omedetou Henshu!

A year has almost past since Henshu was publicly released. In that time, Henshu has gone from relying on the Channel Entries API to running its own methods, leading the way to one of the most popular features: multi-entry custom field editing. After much testing, the day where this feature is a reality is here.

A beta of the upcoming Henshu 1.0.0 is now available for paying users to try out (EE will display it as 0.9.9.1 until 1.0.0 is officially released). The main feature is of course multi-entry custom field editing. Another is the often-requested ability for Henshu to trigger hooks usually found natively in EE, so that third-party add-ons such as Stash or CE Cache can be called when saving data, as you would when saving from an entry form. The full changelog can be found here: https://zenbustudio.com/software/changelog/henshu#1.0.0

With Henshu 1.0.0, the core set of features that were originally planned for Henshu is finally complete. This also means the end of pre-1.x pricing for Henshu, which will more closely follow Hokoku’s pricing once Henshu reaches 1.0.0.

Henshu 1.0.0 is planned to be released on its 1-year public release anniversary, on July 9th, 2014. In the meantime, feel free to contact me if you encounter any issues. Thank you as always for being so enthusiastic about Zenbu Studio’s software. \(^_^)/

Hokoku 1.2.0 has been released with two new features:

Need data exported in a different format than what is displayed in Zenbu? Hokoku now comes with additional options for exporting data. These are per-export profile, per-fieldtype settings.

Want to extend or customize the exported data further? Add options specific to your 3rd-party fieldtype? Developer documentation is also available. Those familiar with adding Zenbu support should feel right at home.

Before 1.2.0, Hokoku was hard-coded to export entries in batches of 100 entries when more than 100 entries were to be exported. Depending on your EE and server setup, this either led to a performance hit or resources running out (eg. out-of-memory errors). In other cases on servers with plenty of resources, batches of 100 entries on an export containing thousands of entries could take time to complete. You now have the option to control how many entries are included in a batch.

If you haven’t heard yet, ExpressionEngine 2.8 was released last Friday. Compatible versions of Zenbu Studio’s commercial add-ons are planned to be released very soon.

In the meantime, early tests show that Zenbu 1.9.0 generally works when accessing the add-on directly from the Modules section in the EE Control Panel. Content => Edit and similar links, however, do not. This is due to the change in CP URL format that is introduced in EE 2.8. Hokoku (Zenbu Export) also suffers from this change, and both add-ons will have a fix release very soon. Henshu (Zenbu Edit) remarkably worked without any issues, but a maintenance release will be released nonetheless.

As always, make sure all commercial add-ons (any add-on, not just those from Zenbu Studio) are up-to-date and known to work with any new released version of ExpressionEngine before upgrading.

The Three Updated Add-Ons of Christmas

Today, three of Zenbu Studio’s add-ons were updated, two of which with new features.

The more boring of the three updates, but still important. A small maintenance update which fixes a number of issues especially related to EE 2.7+. If you happen to encounter errors (hopefully you won’t!), those are also a bit more verbal now.

The major change for Henshu (a.k.a. Zenbu Edit) is the death of the whitelist. This is a bigger deal than it looks. There is a limitation in the way the native EE Channel Entries API works which forced ALL fieldtypes used in a channel to be whitelisted before being able to use Henshu with that channel. This restriction has been removed in version 0.7. Further, Henshu now precisely updates only the data it needs to update, instead of the old method where ALL data for an entry had to be curated and checked for integrity despite updating a single piece of entry data. In addition to this major improvements, the following features have been added:

In addition to a number of bug fixes, here are the main highlights for the Zenbu update:

Until this version, Zenbu actually sent users to the native EE multi-entry category editor for adding or removing categories to entries. This is now running in-house (except for final submission of changes, which EE still takes care of), and allows the display of extra information for easier category management: 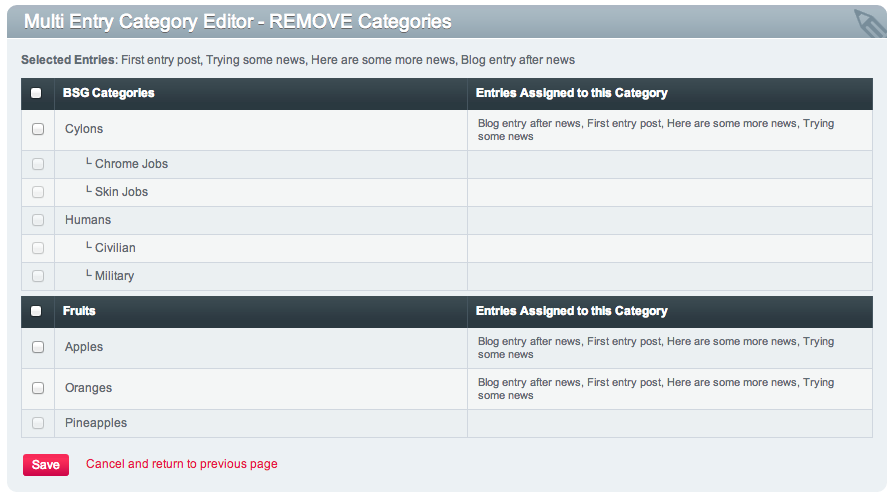 At last Pages URI are displayed, as is, in their own column in Zenbu. They can also be searched on and ordered. Great for managing page-based content!

Display Settings now has a button to temporarily show/hide columns that are set to not be displayed in Zenbu, leaving only columns set to be displayed as visible. Very useful if you need to get rid of visual noise to quickly view your visible fields. It makes shuffling the order of those visible columns around a lot easier as well.

I would also like to take the time to wish everyone a wonderful Christmas and Happy Holidays. Thank you for all your support during the year, and please take some time to get some rest. It’s as important as work!

I decided to move zenbustudio.com to a new host, as my previous hosting contract was coming to an end, and the hosting lacked the flexibility and performance I was looking for. I was recommended DigitalOcean, and decided to give it a spin. Needless to say I am very satisfied with the result.

The VPS servers they offer are cheap, very fast, and documentation/community articles are excellent. You also get a fixed IP and a clean/flat design control panel to work with. None of that ugly cPanel/Webmin stuff (unless you want to install that, which you can). For anyone with some server management knowledge (there is no UI off-the-bat, mostly terminal), I highly recommend signing up with DigitalOcean. Now working on zenbustudio.com feels like running a local machine! I hope you enjoy the preformance boost as well.